Tellington TTouch® was developed by Linda Tellington-Jones as a method of behavioral modification and animal treatment without the use of force. Today, it is used on animals and people to reduce tension and also treat some stress related problems.

The technique consists largely of controlled massage procedures, many of which, through their relaxing effects, help the animal to learn new and more appropriate behaviors more easily.

What sort of problems can be benefited by TTouch®?

TTouch® is used as a training aid in dogs, cats and other animals. Conditions in which benefit has been noted include excessive barking and chewing, lead pulling, jumping up, aggressive behavior, fear, shyness, excitability, car sickness and also some problems associated with aging.

"TTouch® has been found useful in therapy programs for
anxious dogs that fear events over which they have no control."

It is often advocated as part of general relaxation in many training programs for both dogs and cats, especially in very tense individuals. Thus it has been found useful in therapy programs for anxious dogs that fear events over which they have no control (e.g., fireworks, thunderstorms, or even the imminent departure of their owner from the premises).

As with any basic behavior modification technique, improvement is gradual. First the animal has to learn to relax as a result of the TTouch® technique selected. The technique is then employed when the animal is confronted with the problem triggering the unwanted behavior. Thus a dog that vocalizes, soils inappropriately or becomes destructive on being left alone may be conditioned to relax in a normal environment as a result of one of the TTouch® massage techniques. Once relaxation has become established, previous triggers signaling the immediate departure of the owner are put in place (e.g., putting on shoes, picking up car keys). The TTouch® technique is then employed before any departure is made. The pet is thus gradually desensitized to the problem, often using other established desensitization techniques in conjunction with the TTouch®.

If, after reasonable rehearsal the animal does not relax, then a less challenging procedure should be used (e.g., picking up the keys and then putting them down before massaging the dog).

Is special training necessary before I can administer TTouch®?

It is important that you are personally relaxed, and the easiest way to achieve this is by controlled deep breathing. In this way, you do not communicate tension to the animal. When you are tense, it is impossible to apply the “touches” properly because in effect, TTouch® involves a partnership between you and your pet. Every animal varies and the right pressure for one may not be the same for another. This is part of the skill of the therapist. Practice with a friend in order to get feedback as to whether you are generating the right feel. Remember the “touches” have to be repeated several times over different parts of the body.

Are there many different TTouches®?

There are a whole range of TTouch® that have been found to be helpful. They have been given specific and in many cases evocative names in order to 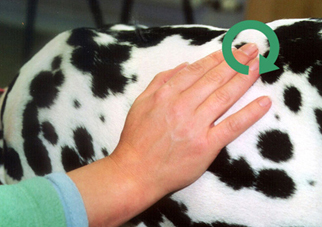 identify them. For example the Clouded Leopard is a basic circular movement that is used in many animals especially highly muscled dogs. Press one hand on the animal and gently cup the other like a paw. The pads of the thumb and the fingers should be in gentle contact with the body but not moving. The three middle finger pads should be held together. The skin is then moved in a clockwise direction starting with an upward motion, moving in a small circle about half an inch in diameter. After making one and a bit revolutions you then move to another part of the animal’s body and repeat the process. Rapid circles appear to increase alertness and slower ones release muscular tension and enhance breathing.

"There are a whole range of
TTouches® that have been found to be helpful."

There is also the Lying Leopard that is very similar to the Clouded Leopard. This involves the same circular movements but the hand is held a little flatter so there is more hand surface in contact with the animal’s body. The increased contact with the dog appears to improve the relaxation generated particularly in fearful or easily startled dogs. If the dog is very excited, start by making a few circles quickly and then slow down as the dog calms down. This particular touch is reputed to help relieve the pain associated with some injuries.

A further modification of this circular motion is the Abalone, also used to calm anxious and excitable animals. The full hand is placed in contact with the animal and moved in a one and a quarter circle but the stroke ends with a reverse action.

Another touch that is frequently used is the so-called Tarantulas Pulling the Plough. Here a fold of skin is taken between the thumb and forefingers of each hand with the thumbs behind the fold touching one another. The fingers are then walked against the natural lie of the hair with the thumbs gently pushing the fold along from behind. This is often used in animals that are very sensitive to touch.

Other techniques include ear and mouth work, again endeavoring to calm and relax the animal.

Will it help if I try to employ some of these techniques? 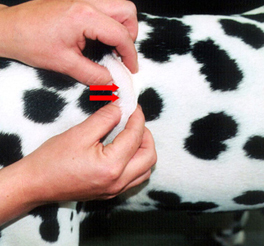 TTouch® appears to help calm a large proportion of pets. However, whether it is the specific touch techniques or merely the effects of training your pet to relax with a gentle and calm massage, has yet to be validated. Obviously, particularly with ear and mouth work caution has to be employed. Pets that are nervous or potentially aggressive may soon learn to enjoy this type of handling if progress is slow and positive, but if safety is a factor or if the pet shows any anxiety you would be best to avoid working toward the ears or mouth.

"TTouch® appears to help calm
a large proportion of pets."

TTouch®, when employed with confident and relaxed actions by the therapist often helps to avoid problems that can arise with nervous animals. For example it may be useful at easing the anxiety of a pet in the veterinary hospital.

How can I find out more information about TTouch®?

© Copyright 2012 LifeLearn Inc. Used and/or modified with permission under license.

If you are experiencing a pet emergency, please contact us! 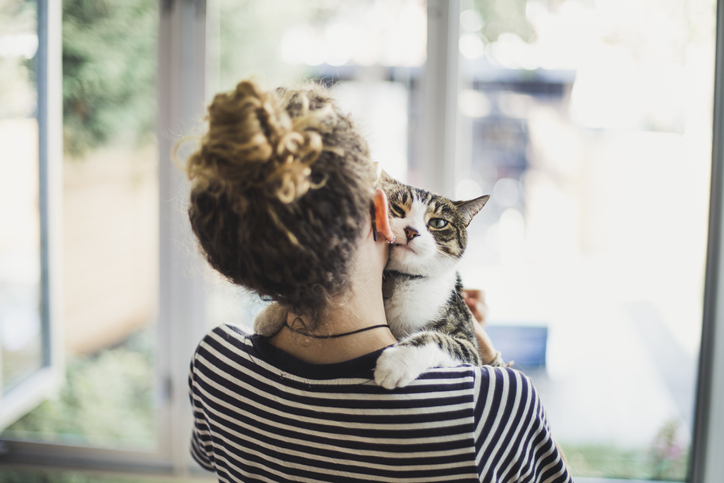